Charles Cunningham Dumville Lees
Charles was educated at Mill Mead Preparatory School Shrewsbury followed by Osborne and Dartmouth College before starting his formal navy training. Below is a letter to his Nanny at the age of six which judging by the drawings accompanying it show he was destined for a career in the services.
Military Record including Regimental and Battalion Information
Charles began his Naval Training in 1907 and passed out from Greenwich and Whale Island in 1911 having gained five first class certificates. ​Below are his record's during training and the list of ships on which he served. The final report tells of an injury to his neck and face when a shell cartridge exploded and also logs his loss of life on the HMS Verulam

Dates of Orders and Commissions

Special Reports of Service
In 1908 shortly after starting his training he sent this postcard to his former Nanny.
Below is his list of ships accompanied by letters he wrote to his Nanny whilst on these boats. 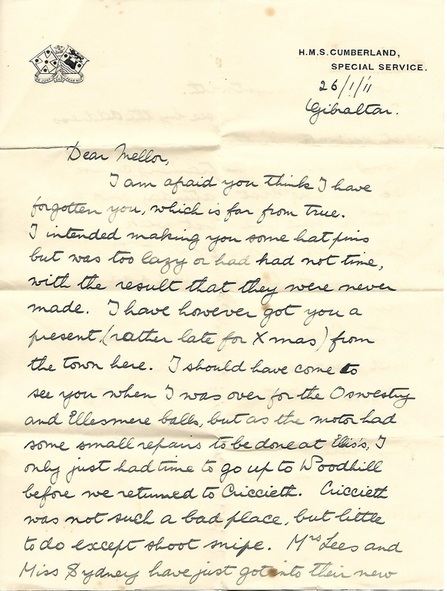 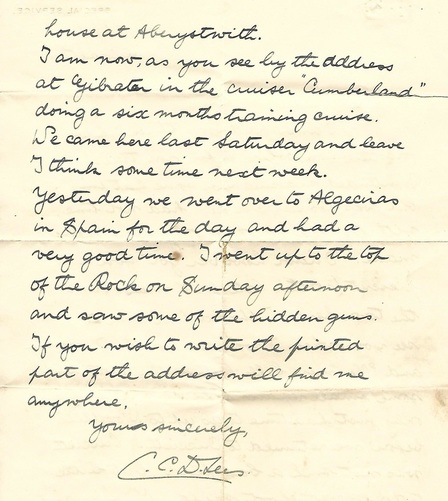 This first letter was written from HMS Cumberland whilst in Gibraltar
His first ship after training was HMS Formidable a Battleship with which he stayed with until May 1912, it was a ship that in later times he must have been thankful of the fact he had been transferred from as it was to be torpedoed and sunk off the Devon coast by German U-Boat 24 on New Year’s Day 1915 with the loss of over 500 of the crew of 750 men.

His second ship (March 1912 to April 1914) was another Battleship the HMS Commonwealth where his tour of duty took him to the Mediterranean. Just before the outbreak of World War 1 Charles now a Sub-Lieutenant saw himself assigned to HMS Fervent which was a Torpedo Boat Destroyer attached as tender to the torpedo school at Chatham.

​The letter below records how he seems bored by the fact that he has not yet seen any action.
By December 1914 Charles had moved on to HMS Redpole from where he wrote the letter below
On the 30th September Charles was promoted to Lieutenant and joined HMS Morning Star which took part in the Battle of Jutland all be it as a screening boat for the main fleet. The letters below were from his time on the Morning Star 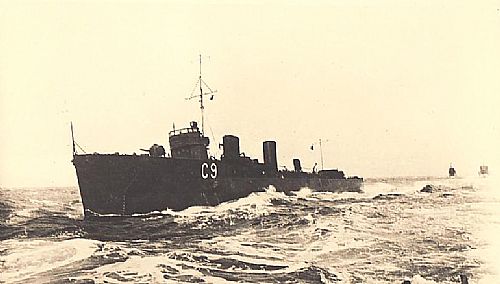 Ships on route in the Battle of Jutland
As the First World War entered its final stages Charles was transferred again from HMS Morning Star to HMS Nimrod from where he wrote his last letter to his former Nanny.
So Charles having survived the war came home and lit the celebratory beacons on Peace Day in Trefonen on July 19th 1919. The local Border Counties Advertizer recorded the event and a precis of their report is included below.

​"The celebrations were held at Woodhill Park the arrangements being made under the leadership of Captain Dumville-Lees. A procession of school children joined up at Trefonen Cross, and headed by a banner marched up to the park singing patriotic songs. Bunting and flags were displayed in profusion around the park and a free tea was given to all the children of the parish, soldiers and old age pensioners. Mrs Dumville-Lees, Mrs Longueville,  Dr Crofton and Mr Godon wainwright were the judges and Mr H Flux acted as secretary"

​​T​here then followed a long list of names of winners of the different events.

​"The prizes were distributed by Mrs Dumville-Lees and afterwards the first verse of Welsh and English national Anthems were sung. Dancing took place on the lawns to the strains of Mr R M Robert's band. An excellent display of fireworks were given from Jockey's Copse and at 11pm Mr Charles Dumville-Lees set fire to the bonfire, much amusement being caused by the burning of a dummy Kaiser and Crown Prince which were fixed at the top of the fire. As a climax to the proceedings a brilliant flare was lit"
Shortly after the celebrations Charles returned to a tour of duty in the Baltic on his new ship the HMS Verulam. In an incredibly cruel twist of fate he was killed on September 4th 1919 when his ship was sunk after striking a German mine in the Gulf of Finland.

It is for that reason that his name appears on the Trefonen War Memorial. 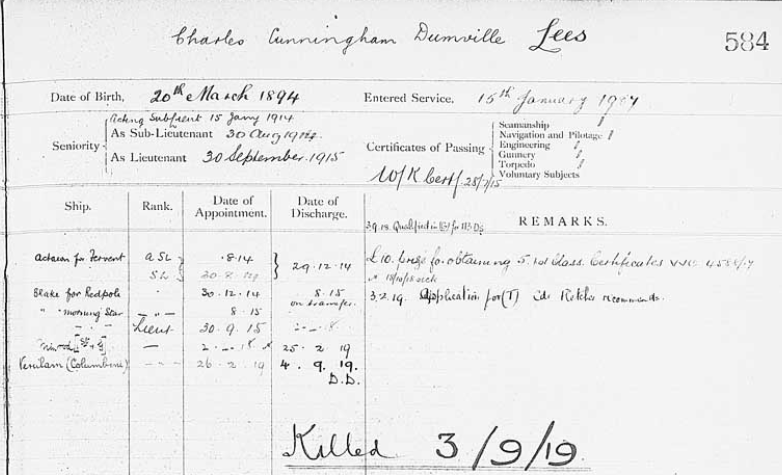 His two older brothers who he mentions in his letters both took part in the war and a diary of one, Arthur Compton Lethbridge Dumville-Lees makes fascinating reading regarding his time fighting in Nigeria/Cameroon in the First World War including information about a Christmas Truce. He later went on to work for the Commonwealth War Graves Commission

A link to this diary which has been transcribed and collated by historian Dan Robinson is included below. http://www.mandaras.info/MandarasPublishing/LeesCameroonsDiary1914-1915.pdf
Census data 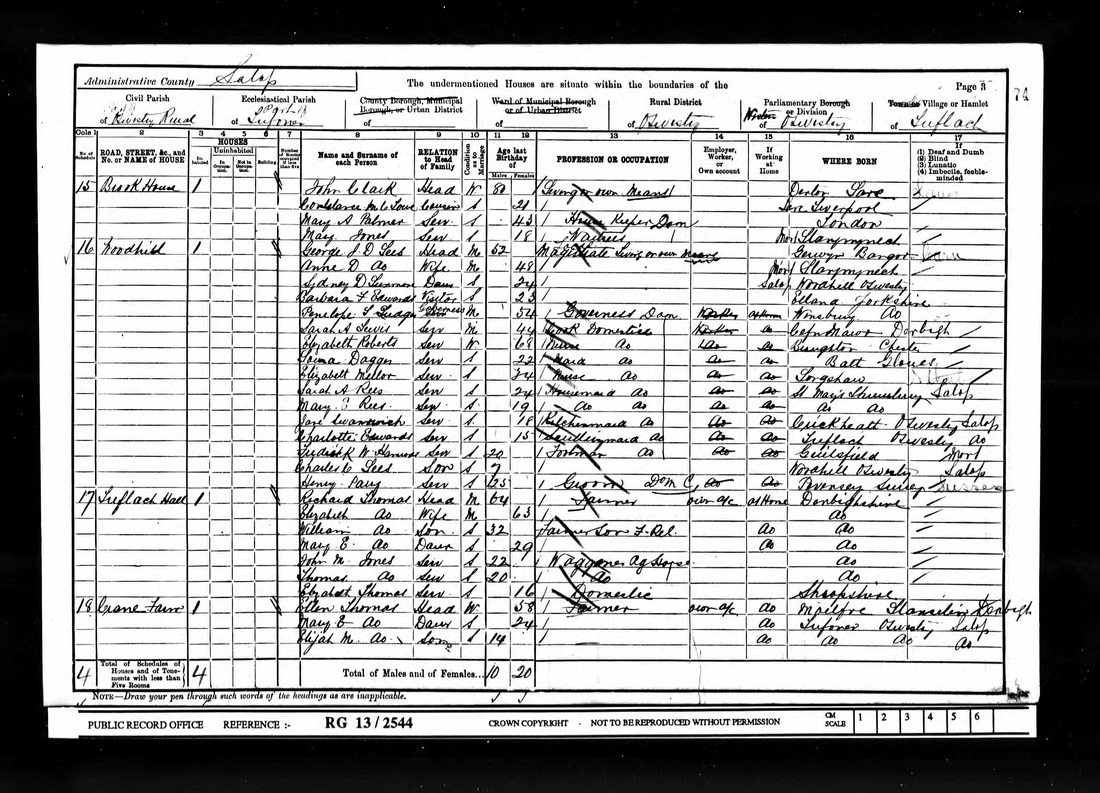 1901 Census - Woodhill showing both Charles and his Nanny 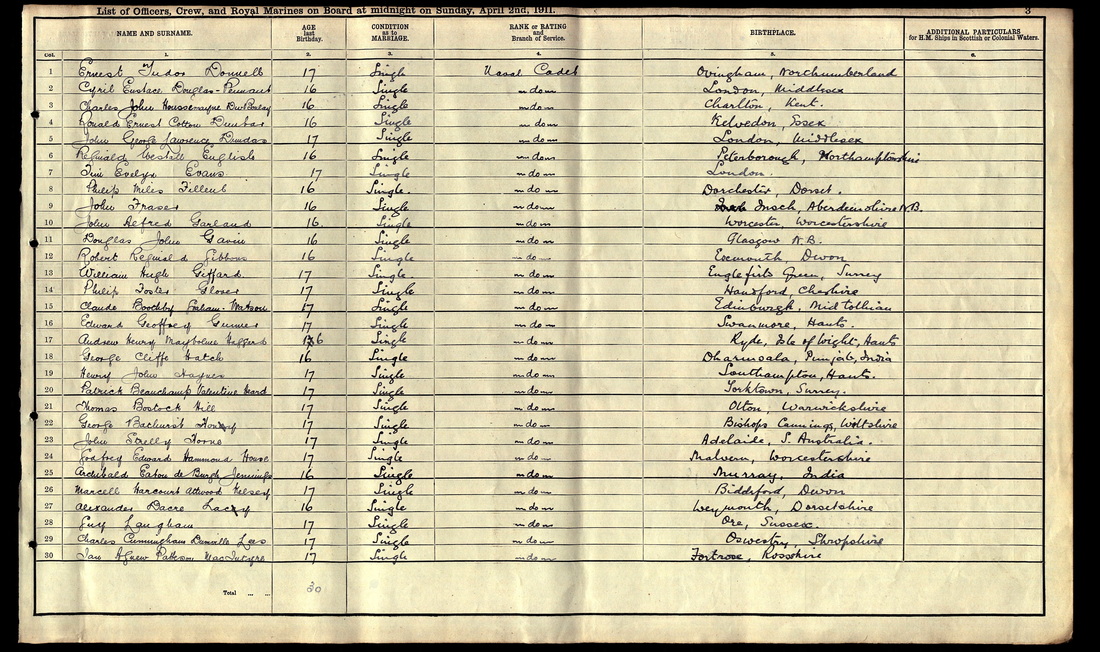 1911 Census - On board Ship
Memorial and War Grave Information
Charles Cunningham Dumville-Lees was killed along with 14 other colleagues on the 4th September 1919. His boat had been sunk in the Finnish Gulf by a German mine.

Nine bodies from the sinking were washed up onto and island beach but only three were identified. These were buried by the side of a lightouse later destroyed in World War 1.​
​The Border Counties Advertizer covered his loss and the Memorial Ceremony and these are shown below.​
​Charles's name appears on a number of memorials as well as the Trefonen War Memorial. These appear below and include the brass plaque in Trefonen Church, his old school Roll of Honour and the Chatham Naval Memorial. His name also appears on the Okehampton War Memorial (Devon) where his mother moved to after Wood Hill was sold.

​She also had a memorial window of stained glass made in Charles's memory which is situated in All Saints Parish Church, Okehampton (a picture of this can be seen at the bottom of this page) 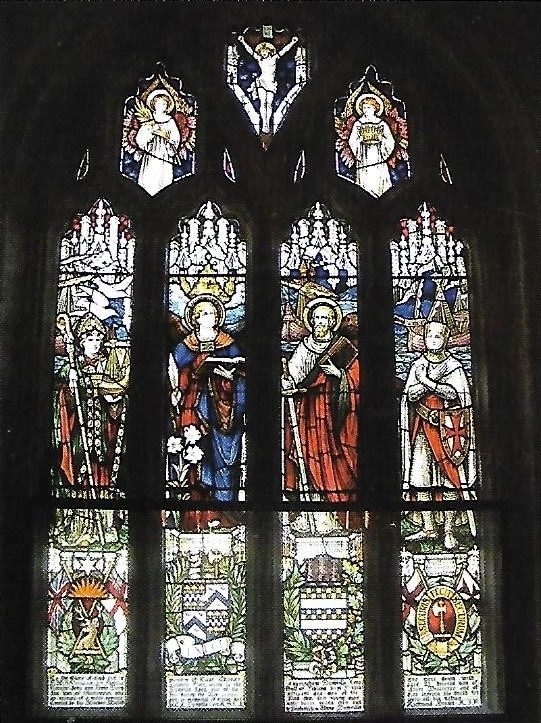