Edward Probert
​He would have seen some of the bloodiest and most difficult fighting of the war including vicious hand to hand fighting at Delville Wood on the Somme in 1916. He finally lost his life on the 9th April 1917 during the assault on Vimy Ridge at the Battle of Arras.

He is remembered with Honour on the Arras Memorial along with two other men from our local community. Below are photos of his Death Penny and his 1914 Christmas Box. The Princess Mary Christmas gift box was a brass or silver tin containing a number of gifts intended to be distributed to all members of the armed forces of the British Empire on Christmas Day 1914. 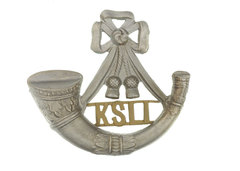 The extract below is taken from the KSLI Regimental history  and gives an account of the action of Edward Probert's battalion the day before he was killed.

"THE BATTLES OF ARRAS, 1917
“On the 8th April the battalion was again in the trenches, in relief of the 9th K.R.R.C. [Kings Royal Rifle Corp], prior to taking part in the Battle of Arras on the 9th April. The ground allotted to the battalion was south of Tilloy from a point about half-way between this village and Telegraph Hill to about 300 yards south of the latter. The enemy was caught unawares, in many cases asleep in the dug-outs, consequently a large number of prisoners was taken with their arms and ammunition. In our line of advance there was a very strong work known as "The Harp" on account of its singular shape, but thanks to the accurate bombardment which had preceded the attack, not much of this was left and the battalion had little difficulty in reaching its objective. The second phase of the attack which had been planned was the capture of the village of Wancourt and the line immediately west of the point, but this was not persevered with. A considerable body of our cavalry was concentrated later on in the day near Telegraph Hill, but they were not able to help the situation much for various reasons.
The weather on this occasion added much to the difficulty of the troops, there being a series of violent snow­storms. Nevertheless the bearing of all ranks was excellent, and it was good to see the undoubted superiority of our men over the enemy”
​
On the day Edward died the part played by the battalion is contained in the following report,

“I was in command of B Company 5th K.S.L.I., operating on the right flank of the battalion and detailed to capture the Cojeul Switch from Eye Lane to Dog Lane inclusive. On obtaining objective I was to take charge of battalion front on Blue Line.
The battalion was formed up in assembly trenches by 2a.m. and the men were made to lie down to avoid observation by the enemy. The assembly trenches were not shelled. At 7.34 a.m. our barrage commenced, and the battalion advanced.
At this time there were two tanks just in front of assembly trenches, and two just behind, the condition of the ground seemed to make their progress very slow and in my line of advance I saw nothing more of them, and they played no part in the operations. The enemy barrage which appeared to be fairly heavy was drawn through the crest of Telegraph Hill immediately west of Telegraph Work. At this point the attacking line also came under heavy machine-gun fire from the direction of Neully Trench and Tilloy. Slight resistance was encountered in Telegraph Hill Trench, and Head Lane, but this was immediately overcome and my company captured between 50-75 prisoners here. No resistance was offered in Pole Trench, but enemy fired a machine gun from Nouvion Lane. On a patrol being sent forward, the enemy abandoned Nouvion Lane and ran to the rear, but were shot down by our Lewis-gun fire. One enemy machine gun was captured. The D.L.I, [Durham Light Infantry] of the 43rd Brigade had converged slightly into my area, but I occupied a part of Pole Trench and had established communication with the D.L.I. on my right by 8.45 a.m. Germans in dug-outs were cleared out by 9.10 a.m., and work was forthwith started in consolidating the line. I captured and consolidated this line with the remnants of A, B and C Companies. D Company had meantime obtained their objective in Silent Work, and by 10 a.m. communication had been established with the Suffolks on their left and the Ox. and Bucks Light Infantry in the String and Negrine Trench. At 1.15 p.m. the R.B. passed through my line to establish an outpost line in advance. They appeared to encounter no resistance whatever”
Total casualties in the battalion as far as can be ascertained at present amount to 12 officers and 189 other ranks.
​
Trophies. Only one enemy machine gun was captured, but the trench system is so smashed up by our artillery fire, that it is very possible several others are buried in the debris, also I needed every man in my final objective and could not send men back to search Telegraph Hill Trench, the enemy's front line. We have secured several hundred rifles and a large quantity of bombs and equipment.

Prisoners. I would estimate that the prisoners taken by the battalion numbered over 300.
​
Signed, O. S. Benbow-Rowe, Captain, 5th K.S.L.I." 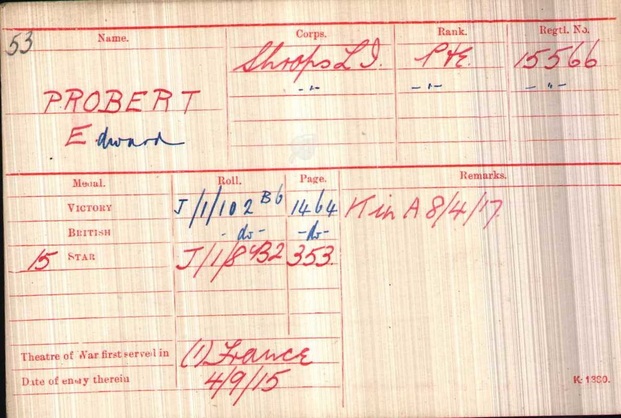 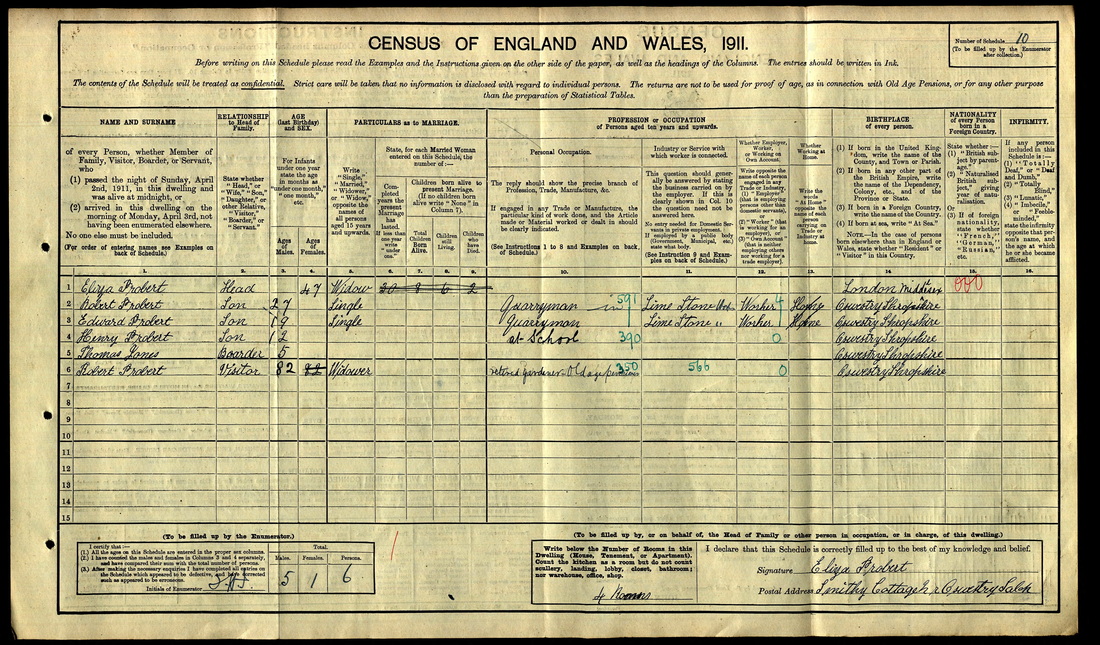 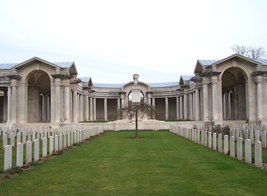 Faubourg-D'Amiens Cemetery
War Grave and Memorial Information
Private Edward Probert
​15566 Kings Shropshire Light Infantry
is Remembered with Honour on the Faubourg-D'Amiens Cemetery in the town of Arras.  Edward is also mentioned on the Nantmawr British School Roll of Honour where he attended which was created by another former pupil and soldier before the war had ended in 1917.

​Historical Information
The French handed over Arras to Commonwealth forces in the spring of 1916 and the system of tunnels upon which the town is built were used and developed in preparation for the major offensive planned for April 1917.

The Commonwealth section of the FAUBOURG D'AMIENS CEMETERY was begun in March 1916, behind the French military cemetery established earlier. It continued to be used by field ambulances and fighting units until November 1918. The cemetery was enlarged after the Armistice when graves were brought in from the battlefields and from two smaller cemeteries in the vicinity.


click on the link below for more information
http://www.cwgc.org/find-a-cemetery/cemetery/82700/ARRAS%20MEMORIAL

​On a recent visit to the cemetery (Sept 2015) work was being undertaken to restore the Memorial however access to most areas was still possible.
Edward is also mentioned on the Nantmawr British School Roll of Honour where he attended which was created by another former pupil and soldier before the war had ended in 1917
Powered by