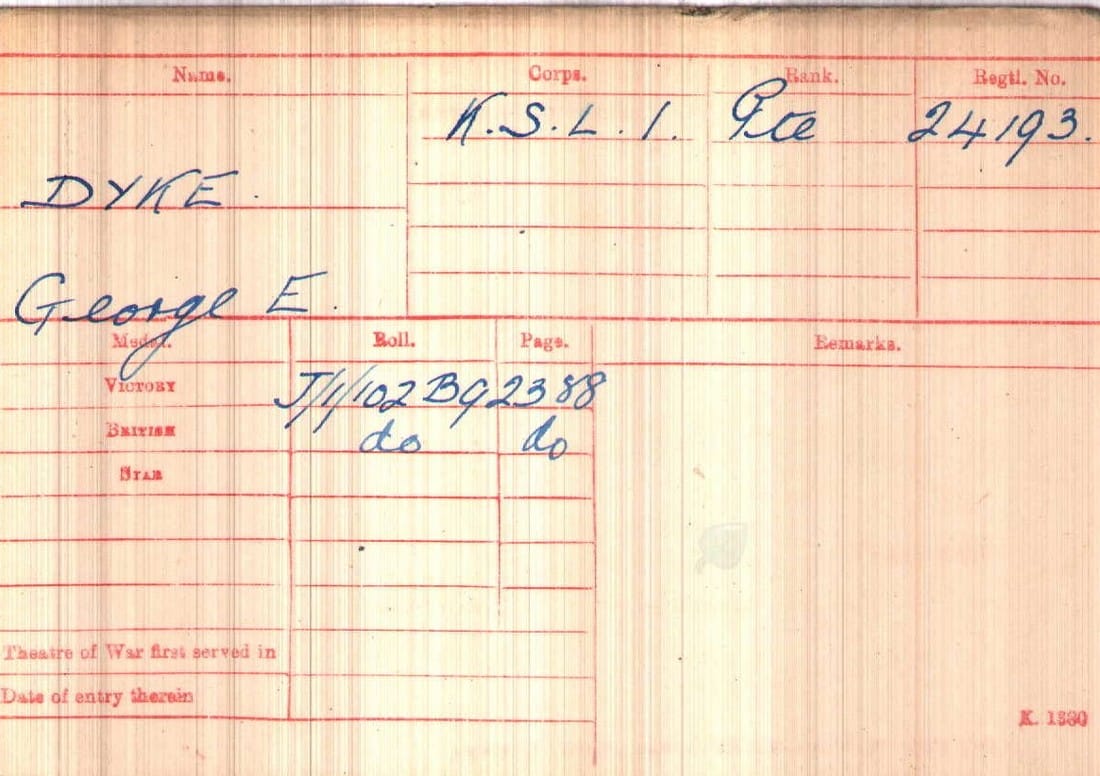 Medal Roll Index Card
​Battalion Information.
This Battalion had seen action in some of the hardest fighting around Ypres in the spring of 1915, before more action on the Somme and then moving on to Salonika in December 1915 where it spent nearly three years fighting the Bulgarian Army.

From June 1916 to December 1917 the 2nd Battalion KSLI were in trenches at Neohari and in the final offensive against Bulgaria, it was one of the first allied units to entre enemy territory.

The 2nd KSLI absorbed the war-raised 8th Battalion in November 1918 and returned home via Southern Turkey, after service at Batum on the Black Sea Dec. 1918 - June 1919, protecting oil supplies in the face of the Russian Civil War.

It was sent to Fermoy and Dublin during the last stages of British rule and was the last British battalion to leave Dublin Castle on the formation of the Irish Free State in 1921.
2nd Battalion Battle Honours:
France and Flanders 1915 ; Macedonia 1915-18 ; Gravenstafel ; Ypres 1915* ; St. Julien ; Frezenberg* ; Bellewaerde. (7)
Census data 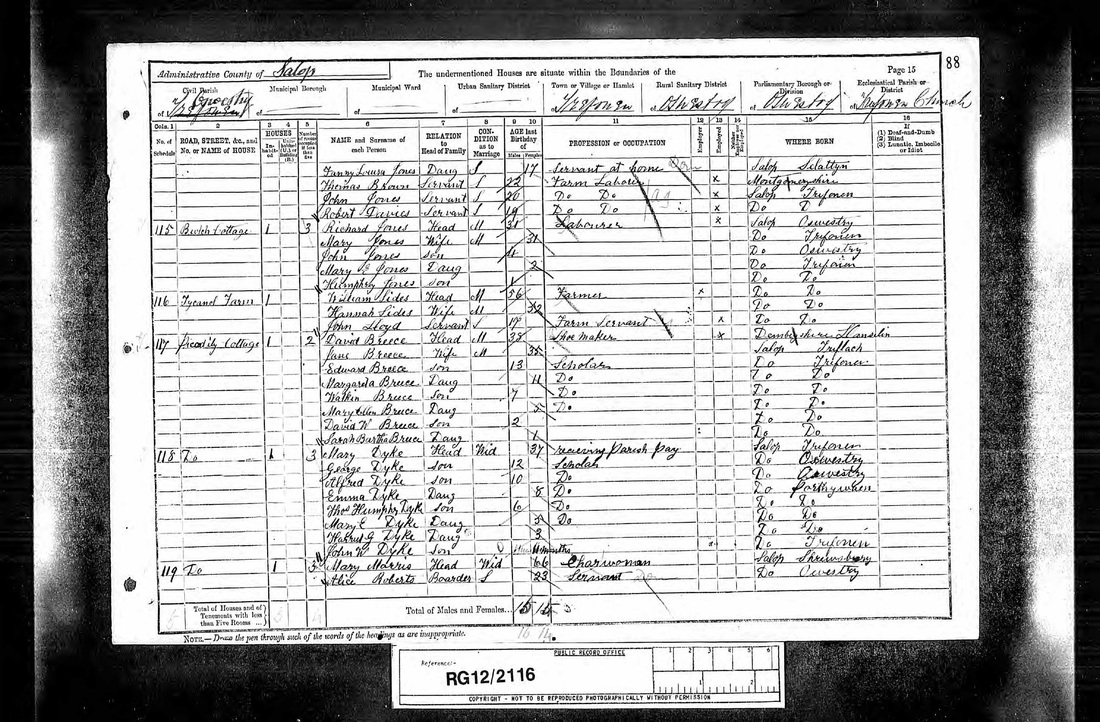 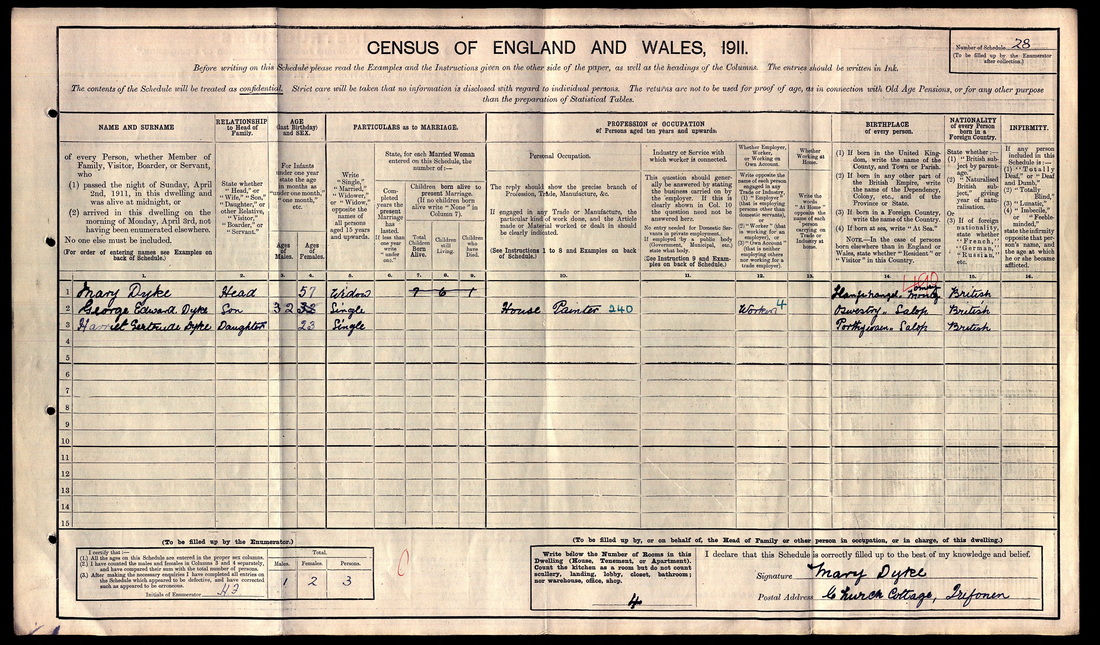 1911 Census - Church House, Trefonen - House Painter
Historical Information
At the invitation of the Greek Prime Minister, M.Venizelos, Salonika (now Thessalonika) was occupied by three French Divisions and the 10th (Irish) Division from Gallipoli in October 1915. Other French and Commonwealth forces landed during the year and in the summer of 1916, they were joined by Russian and Italian troops. In August 1916, a Greek revolution broke out at Salonika, with the result that the Greek national army came into the war on the Allied side.

The town was the base of the British Salonika Force and it contained, from time to time, eighteen general and stationary hospitals. Three of these hospitals were Canadian, although there were no other Canadian units in the force.

The earliest Commonwealth burials took place in the local Protestant and Roman Catholic cemeteries, and the Anglo-French (now Lembet Road) Military Cemetery was used from November 1915 to October 1918. The British cemetery at Mikra was opened in April 1917, remaining in use until 1920. The cemetery was greatly enlarged after the Armistice when graves were brought in from a number of burial grounds in the area.

MIKRA BRITISH CEMETERY now contains 1,810 Commonwealth burials of the First World War, as well as 147 war graves of other nationalities.

Within the cemetery will be found the MIKRA MEMORIAL, commemorating almost 500 nurses, officers and men of the Commonwealth forces who died when troop transports and hospital ships were lost in the Mediterranean, and who have no grave but the sea. They are commemorated here because others who went down in the same vessels were washed ashore and identified, and are now buried at Thessalonika.
Powered by