Peter George Morris (M M)
​Prior to the war Peter had served as soldier in the Montgomeryshire Yeomanry. A blacksmith by trade he enlisted for active service on 7th August 1915. 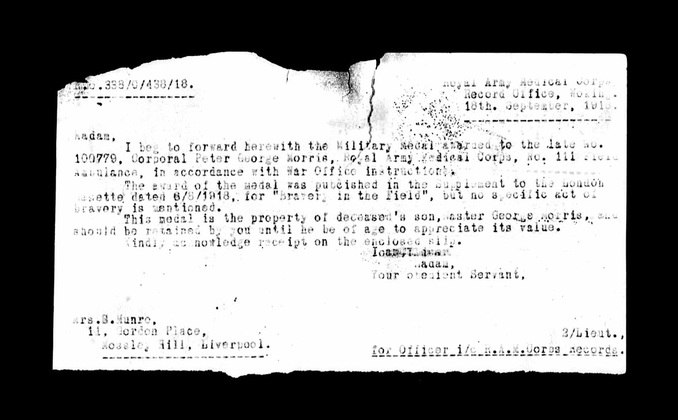 Letter to George's guardian.
Transcription
​" I beg to forward herewith the Military Medal awarded to the late 100779 Corporal Peter George Morris, Royal Army Medical Corps, 111 Field Ambulance in accordance with War Office instructions
​The award of the medal was publicised in the London Gazette dated 6/8/1918 for "Bravery in the Field" but no specific act of bravery is mentioned. The medal is the property of the deceased's son Master George Morris and should be retained by you until he be of age to appreciate its value"
In 1855, in the midst of severe public and journalistic criticism of army medical provision during he Crimean War (1854-56), a unified Medical Staff Corps was formed to provide other ranks medical personnel. This corps was renamed the Army Hospital Corps in 1857, then the Medical Staff Corps in 1884.

In the meantime, in 1873, the provision of medical officers on a regimental basis was abolished and in its place a single Army Medical Department established. Finally, in 1898, the Department and Corps were merged into a single unit, known as the Royal Army Medical Corps (RAMC), whose personnel were sent straight into action in the Sudan (1896-98) and the Boer War (1899-1902).
As with the Crimean War, the South African conflict demonstrated the importance of army medical provision and the fatal consequences when hygiene advice was ignored. Thus, by the outbreak of the First World War in 1914, the unit was recognised as vital to any national war effort. During that conflict its personnel served in every theatre of war and it expanded to 154,000 other ranks and 13,000 officers. The RAMC lost 743 officers and 6,130 soldiers killed.

Members of the unit and its predecessors have been awarded 27 Victoria Crosses (VC), including two out of only three VC bars ever awarded (designating a second award of the VC to the same person). An RAMC private, 19-year-old Michelle Norris, was also the first female recipient of the Military Cross (MC), in recognition of her actions on 11 June 2006 at Al Amarah in Iraq.
In spite of all this, the RAMC is a non-fighting arm whose members may only use their weapons in self-defence.

This is symbolised on parade by its officers holding their scabbard with their left hand rather than drawing their swords, and by its other ranks never fixing their bayonets. Its involvement in every theatre of war the Army has seen means it has no battle honours.
​
The corps’s cap badge is a crown above a laurel wreath containing a serpent entwined up a staff. This is the staff of Asclepius, the ancient Greek god of healing and medicine.
Census data
​The 1891 census below shows Peter George aged just 15 living and working at home in Morton House Treflach, working as a Blacksmith at home with his father who was a Wheelwright. 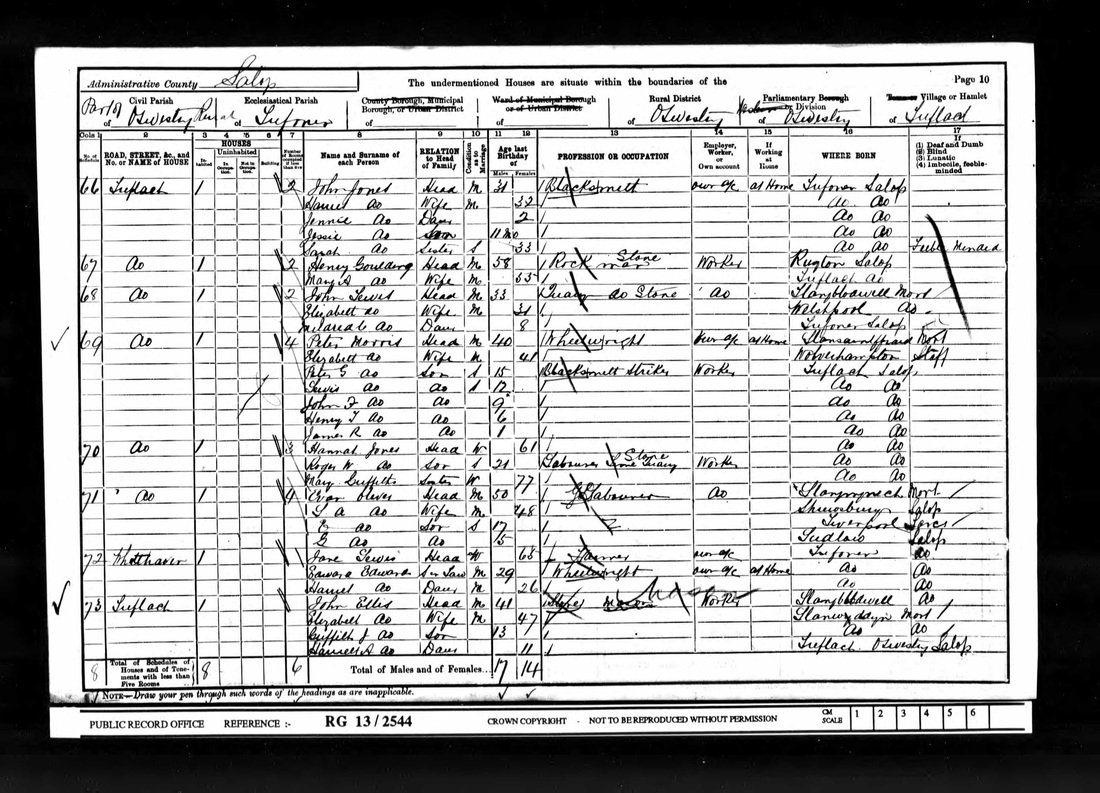 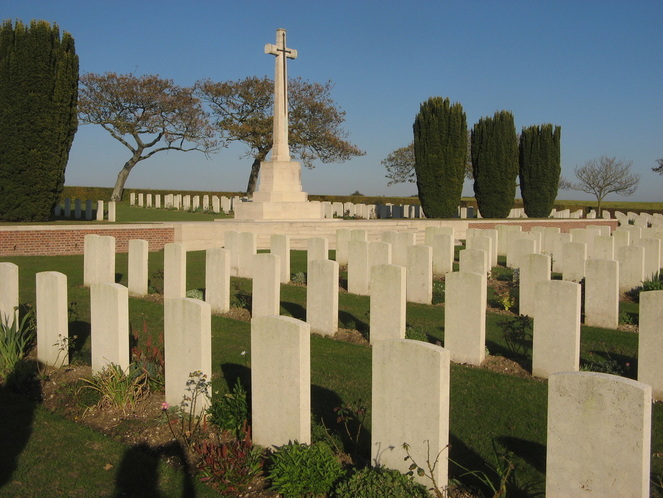 Abbeville Communal Cemetary Extention
Historical Information.
For much of the First World War, Abbeville was headquarters of the Commonwealth lines of communication and No.3 BRCS, No.5 and No.2 Stationary Hospitals were stationed there variously from October 1914 to January 1920. The communal cemetery was used for burials from November 1914 to September 1916, the earliest being made among the French military graves.

​The extension was begun in September 1916.​ During the early part of the Second World War, Abbeville was a major operational aerodrome, but the town fell to the Germans at the end of May 1940. On 4 June, an attempt was made by the 51st Division, in conjunction with the French, to break the German bridgehead, but without success. Towards the end of 1943, eight large ski shaped buildings appeared near Abbeville. These proved to be storage units for flying bomb components an they were heavily bombed by Commonwealth air forces. Abbeville was retaken on 4 September 1944 by Canadian and Polish units.

The Commonwealth sections of both cemetery and extension were designed by Sir Reginald Blomfield.

click on the link below for more information
​http://www.cwgc.org/find-a-cemetery/cemetery/7700/ABBEVILLE%20COMMUNAL%20CEMETERY%20EXTENSION
Powered by