Richard Parry Roberts M.M.
Military Record including Regimental and Battalion Information
​The Machine Gun Corps
"No military pomp attended its birth or decease. It was not a famous regiment with glamour and whatnot, but a great fighting corps,born for war only and not for parades. From the moment of its formation it was kicking. It was with much sadness that I recall its disbandment in 1922; like old soldiers it simply faded away“
​
So said former machine gunner George Coppard, in his epic autobiography -
“With a machine gun to Cambrai”.
"On 10th August 1917, at a position south-east of Frezenberg, when in charge of a Vickers gun in an advanced isolated post he showed exceptional powers of leadership and gallantry. Despite heavy sniping fire and shelling, he kept his gun in action for twenty-four hours, inflicting heavy casualties on a large party of the enemy advancing towards Hanebeke Wood from the direction of Anzac.  Later, finding that he could obtain a better field of fire by moving forward to an exposed position, he did not hesitate to do so. He has always shown exceptional bravery"
​
​The image below is the actual report​ taken from the 195th machine Gun Corps War Diary for the 10th and 11th of August 1917 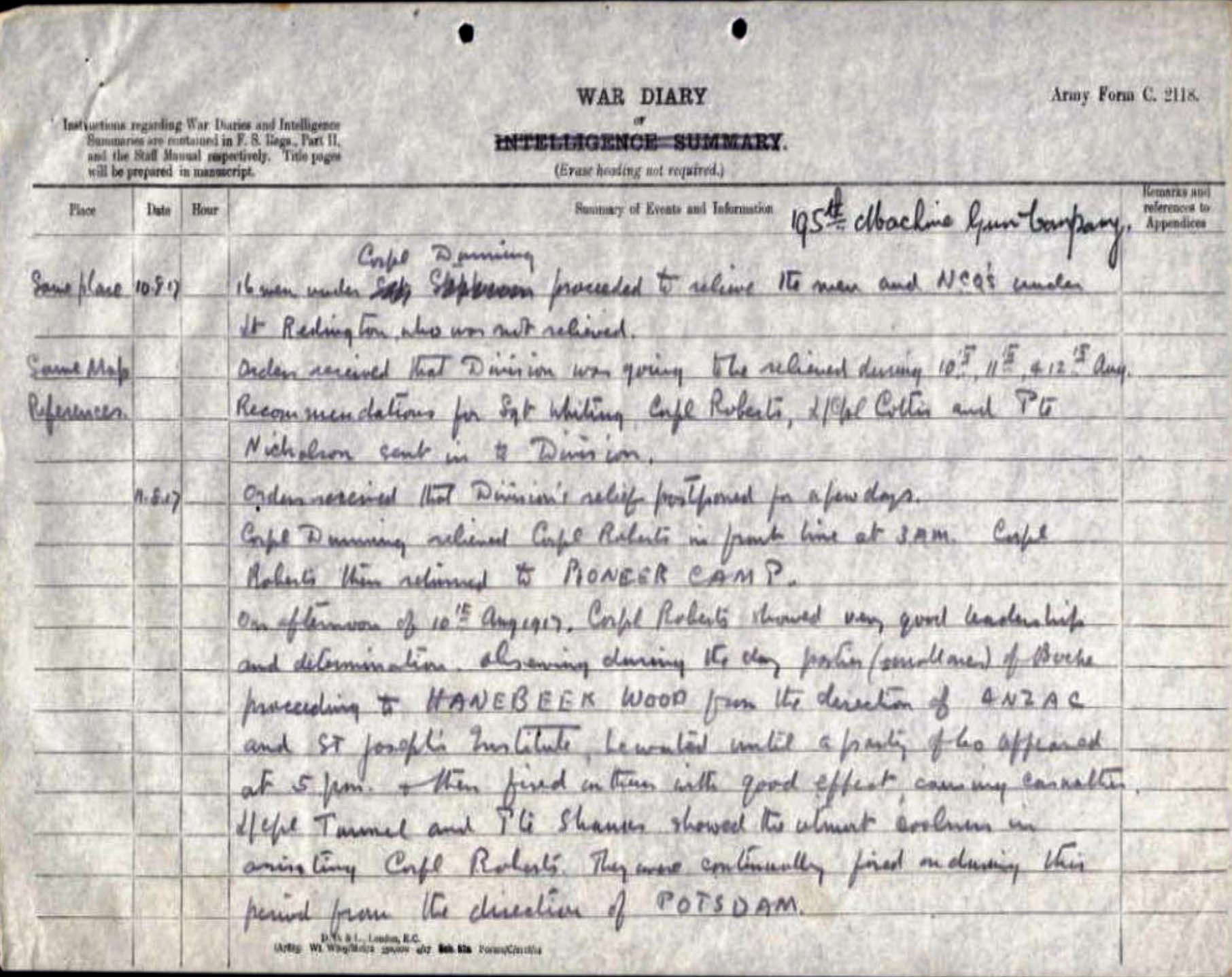 The announcement of his award was made on the 30th Oct 1917 in the London Gazette​https://www.thegazette.co.uk/London/issue/30364/supplement/11341/data.htm ​
Below are two silk postcards sent from the frontline in 1917 asking about his family and sending love to his newly born nephew Harold. 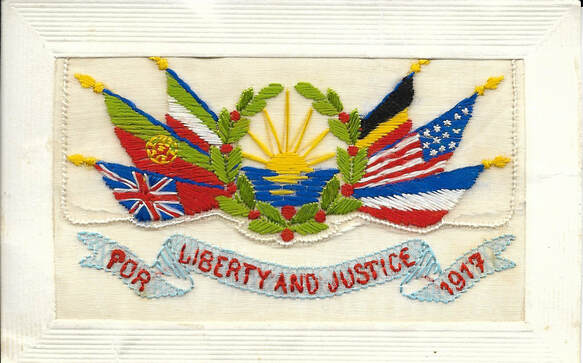 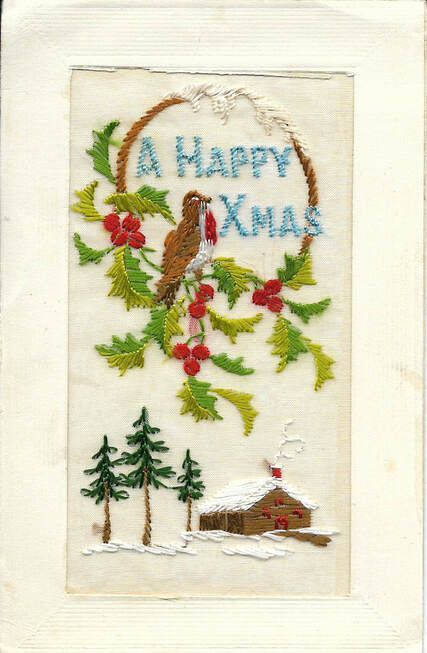 Richard Parry Roberts has no known grave he is originally recorded as wounded and missing which it seems prompted his family to request information from the International Red Cross to see if he was a prisoner of war, see request cards below from a sister and a brother. 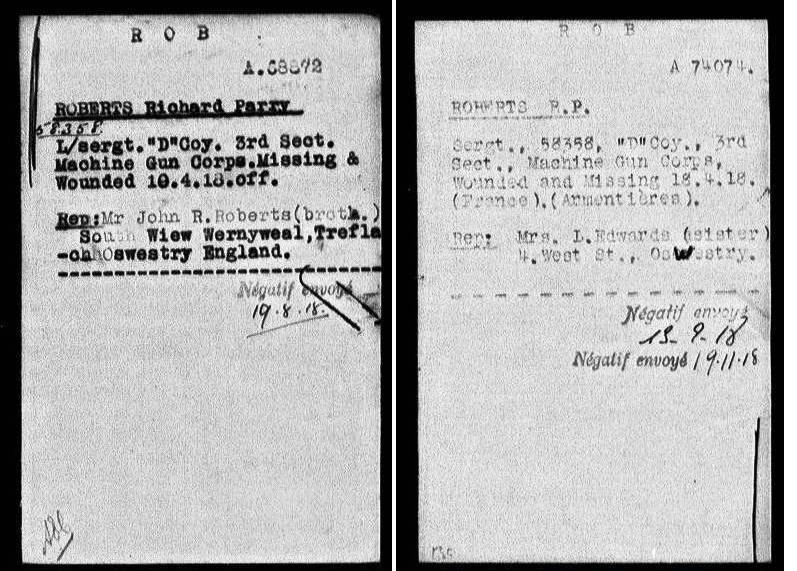 Prisoner of War enquiry cards
Sadly this was not the case and his death was accepted as occurring on the 18/4/1918 as seen in the soldiers effects records relating to him. ​(see below) There is also a photo of his Commonwealth War Graves certificate, his Death Penny and his family's letter from the King. 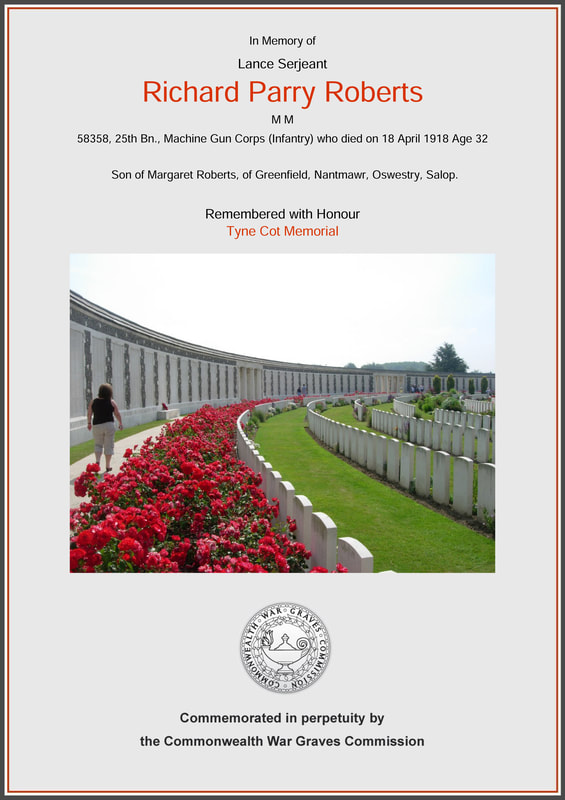 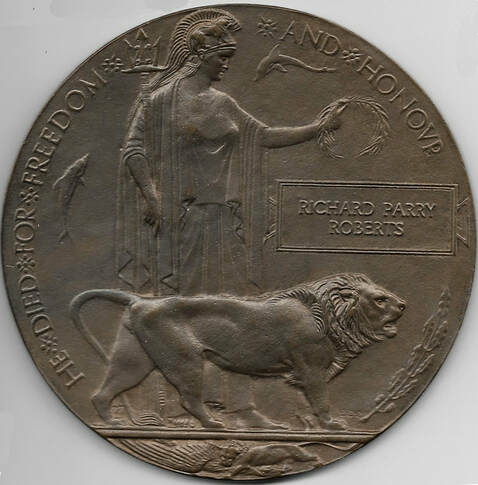 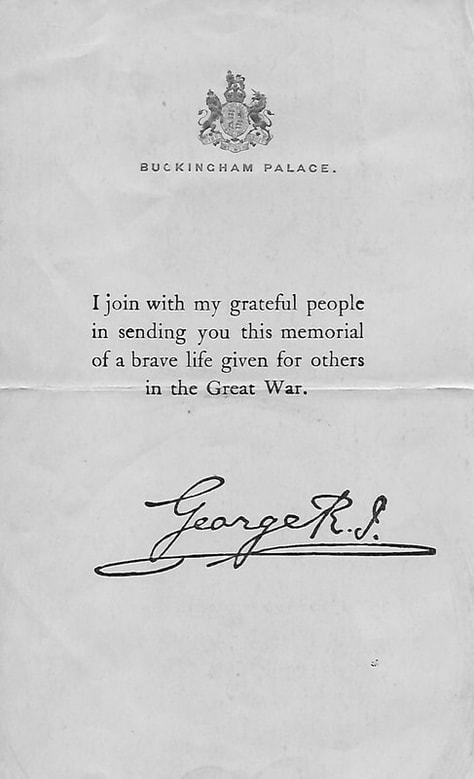 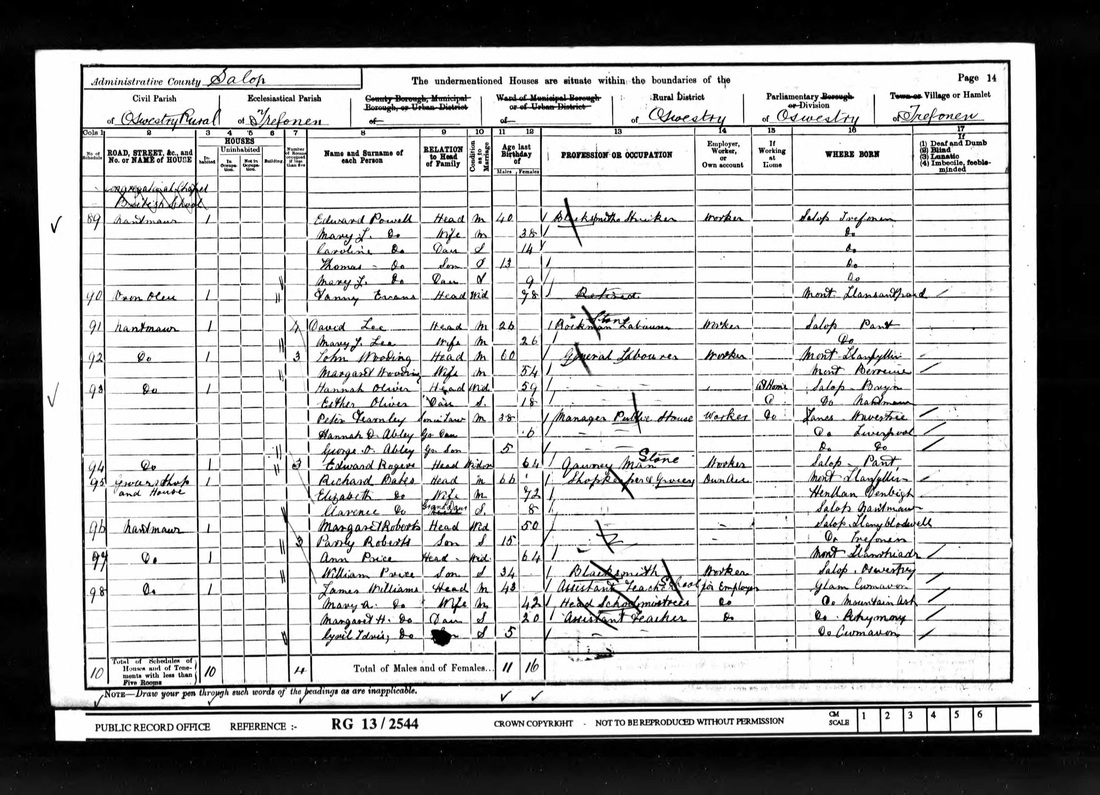 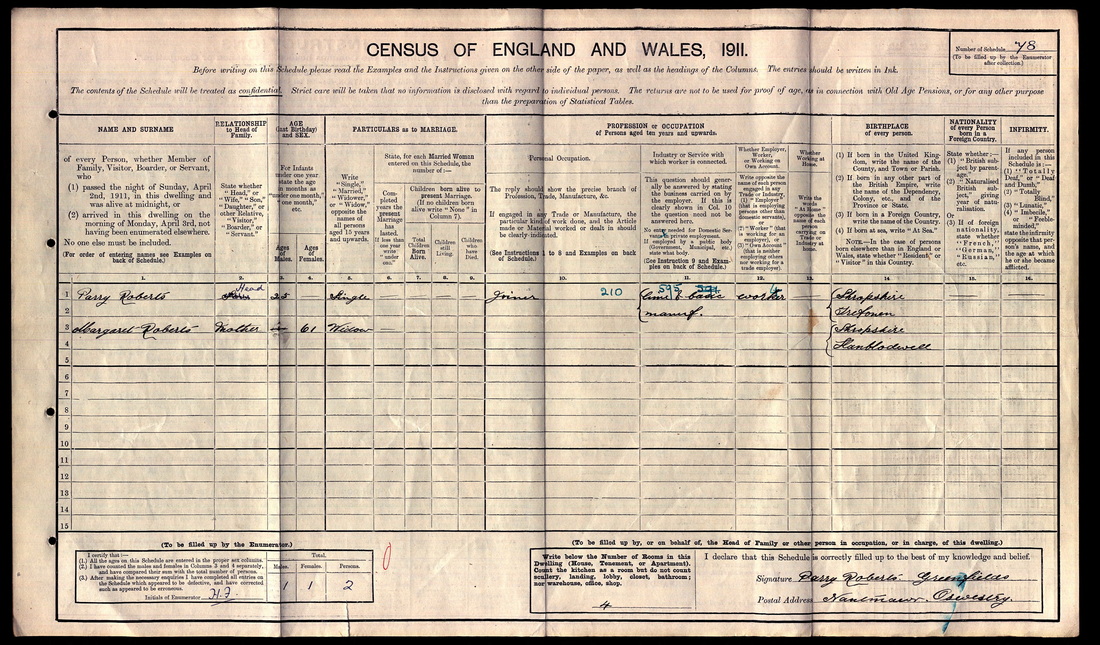 1911 Census - Nantmawr - Joiner
​The TYNE COT MEMORIAL forms the north-eastern boundary of Tyne Cot Cemetery and commemorates nearly 35,000 servicemen from the United Kingdom and New Zealand who died in the Ypres Salient after 16 August 1917 and whose graves are not known.

The memorial stands close to the farthest point in Belgium reached by Commonwealth forces in the First World War until the final advance to victory.

The memorial was designed by Sir Herbert Baker with sculpture by F V Blundstone.

Historical Information
​'Tyne Cot' or 'Tyne Cottage' was the name given by the Northumberland Fusiliers to a barn which stood near the level crossing on the Passchendaele-Broodseinde road. The barn, which had become the centre of five or six German blockhouses, or pill-boxes, was captured by the 3rd Australian Division on 4 October 1917, in the advance on Passchendaele.

One of these pill-boxes was unusually large and was used as an advanced dressing station after its capture. From 6 October to the end of March 1918, 343 graves were made, on two sides of it, by the 50th (Northumbrian) and 33rd Divisions, and by two Canadian units. The cemetery was in German hands again from 13 April to 28 September, when it was finally recaptured, with Passchendaele, by the Belgian Army. 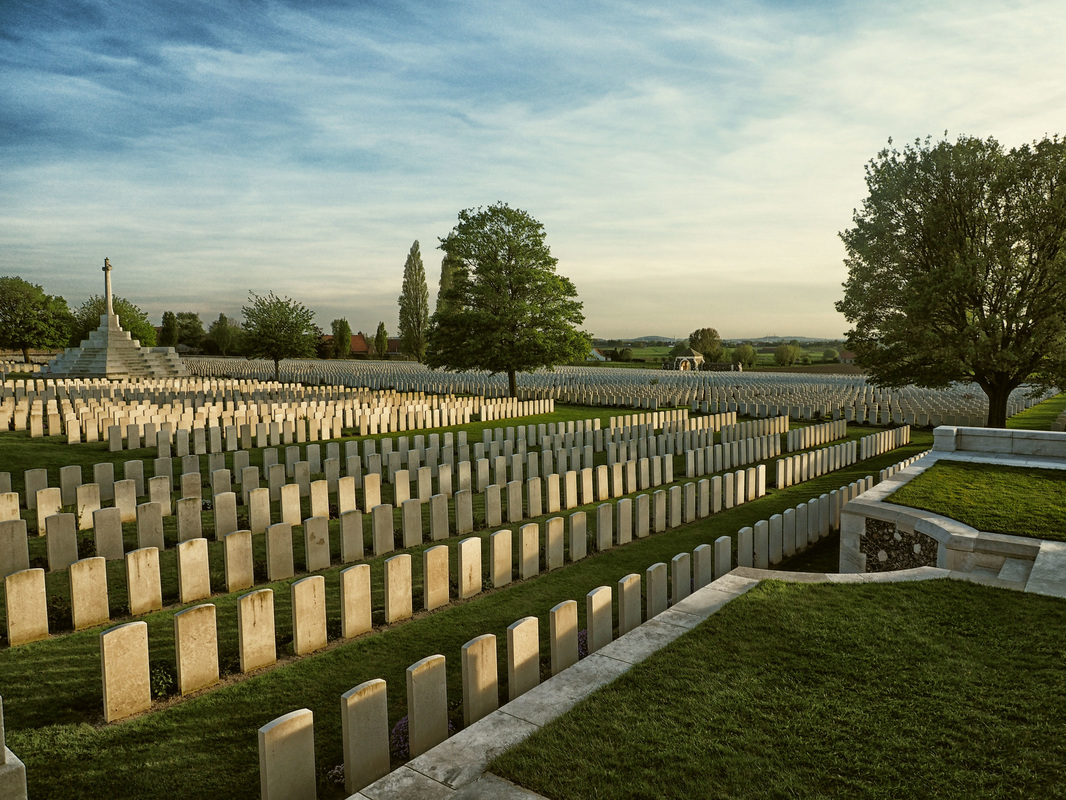 Tyne Cott Cemetery - Photo by Chris Woods
TYNE COT CEMETERY was greatly enlarged after the Armistice when remains were brought in from the battlefields of Passchendaele and Langemarck, and from a few small burial grounds, including the following:

It is now the largest Commonwealth war cemetery in the world in terms of burials. At the suggestion of King George V, who visited the cemetery in 1922, the Cross of Sacrifice was placed on the original large pill-box. There are three other pill-boxes in the cemetery.

There are now 11,961 Commonwealth servicemen of the First World War buried or commemorated in Tyne Cot Cemetery. 8,373 of the burials are unidentified but there are special memorials to more than 80 casualties known or believed to be buried among them. Other special memorials commemorate 20 casualties whose graves were destroyed by shell fire. There are also 4 German burials, 3 being unidentified.

The cemetery was designed by Sir Herbert Baker.

​click on the link below for more information
​www.cwgc.org/find-a-cemetery/cemetery/53300/TYNE%20COT%20CEMETERY
The Machine Gun Corps Memorial In London 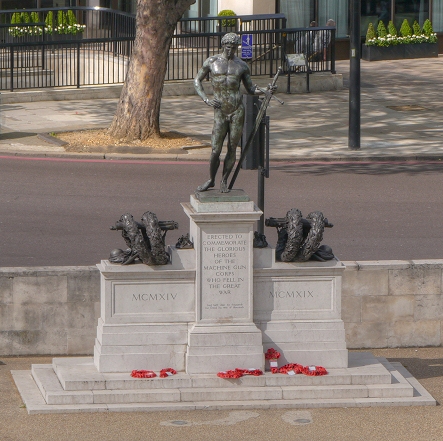 The Boy David - Machine Gun Memorial in London
The inscription on the main column reads:
"ERECTED TO COMMEMORATE THE GLORIOUS HEROES OF THE MACHINE GUN CORPS WHO FELL IN THE GREAT WAR"
and then below, a Biblical quotation from 1 Samuel 18:7:
​"Saul has slain his thousands but David his tens of thousands".

​The plinths to either side bear the dates MCMXIV and MCMXIX. A further inscription on the rear records that the Machine Gun Corps was formed in October 1915 and disbanded in 1922; in that time, some 11,500 officers and 159,000 other ranks served in the Corps, of whom 1,120 officers and 1,671 other ranks were killed, and 2,881 officers and 45,377 other ranks wounded, missing or prisoners-of-war. The high casualty rate of the Corps, nearly 30%, arose from the exposed position from which it typically fought, leading to its nickname, "The Suicide Club". 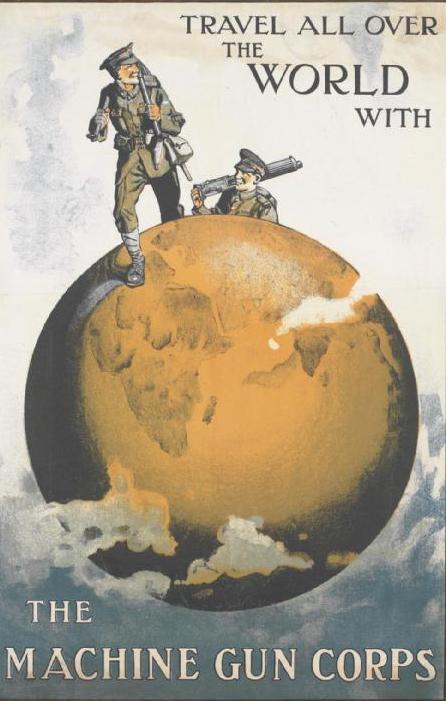