Francis Henry Carsley
The 8th Battalion Kings Shropshire Light Infantry was a war-raised Service Battalion, formed in Shrewsbury in September 1914 under Lt. Col. C. H. Sisted and we know that when Francis enlisted he was assigned to C Company.

He landed in France on 8th October 1915 where after only a few weeks on the Western Front and before seeing any action the Battalion was transferred to the war in Salonika as a part of the 22nd Division arriving in early November 1915.
​
Francis Henry Carsley spent the remainder of his war on the Salonika front around Doiran, where his Battalion suffered severely from malaria as well as from its encounters with the enemy. Periods of routine trench work, in reserve, along the Struma or in the defences of Salonika were interspersed with some severe fighting, as at "Pip Ridge", near Lake Doiran, in February 1917 and again in September 1918.
Francis was like so many of his comrades to suffer with illness and was first taken ill with Pyrexia (high temperature) on 28th July 1917. He was transferred at some stage suffering with Malaria to 21 Casualty Clearing Station. We are unsure if he ever returned to his unit on the frontline but he was to lose his life on a date recorded as 18th September 1918. He is Remembered with Honour on the Doiran Memorial in Salonika.

​click on the link below to find out more about Salonika Campaign and the 22nd Division
http://salonikacampaignsociety.org.uk/tag/22-division/​ 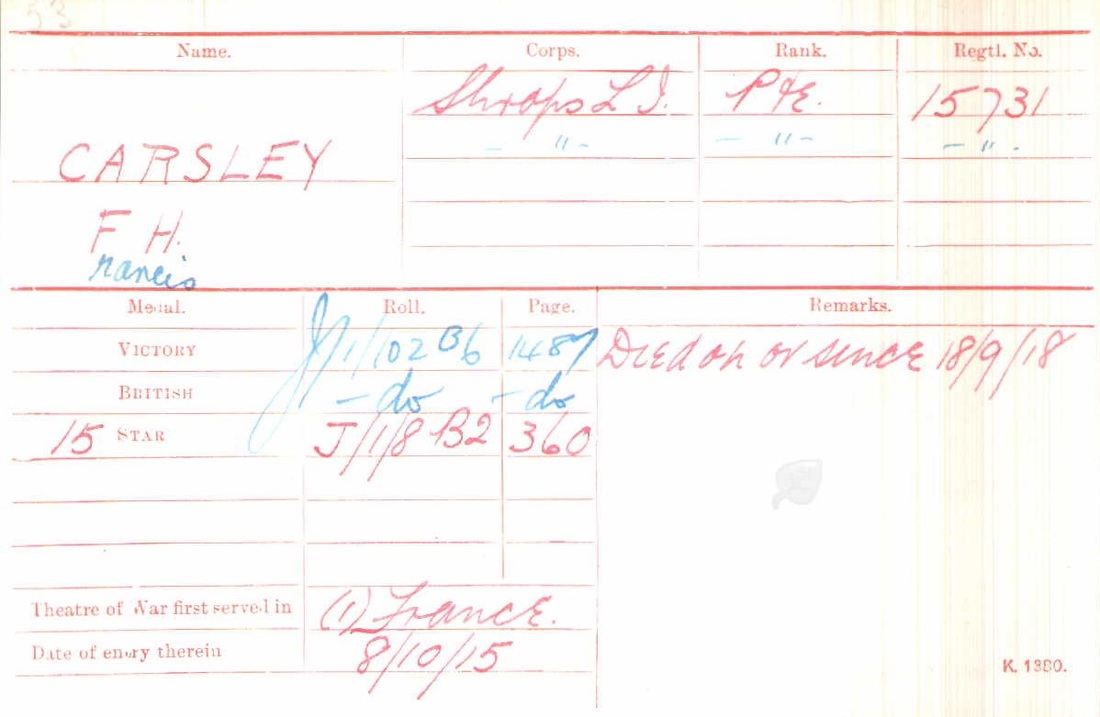 For more information on the Kings Shropshire Light Infantry and there World War One day to day diary please click on the facebook page link below
​www.facebook.com/KSLI.Battlefields.tours/
Census data 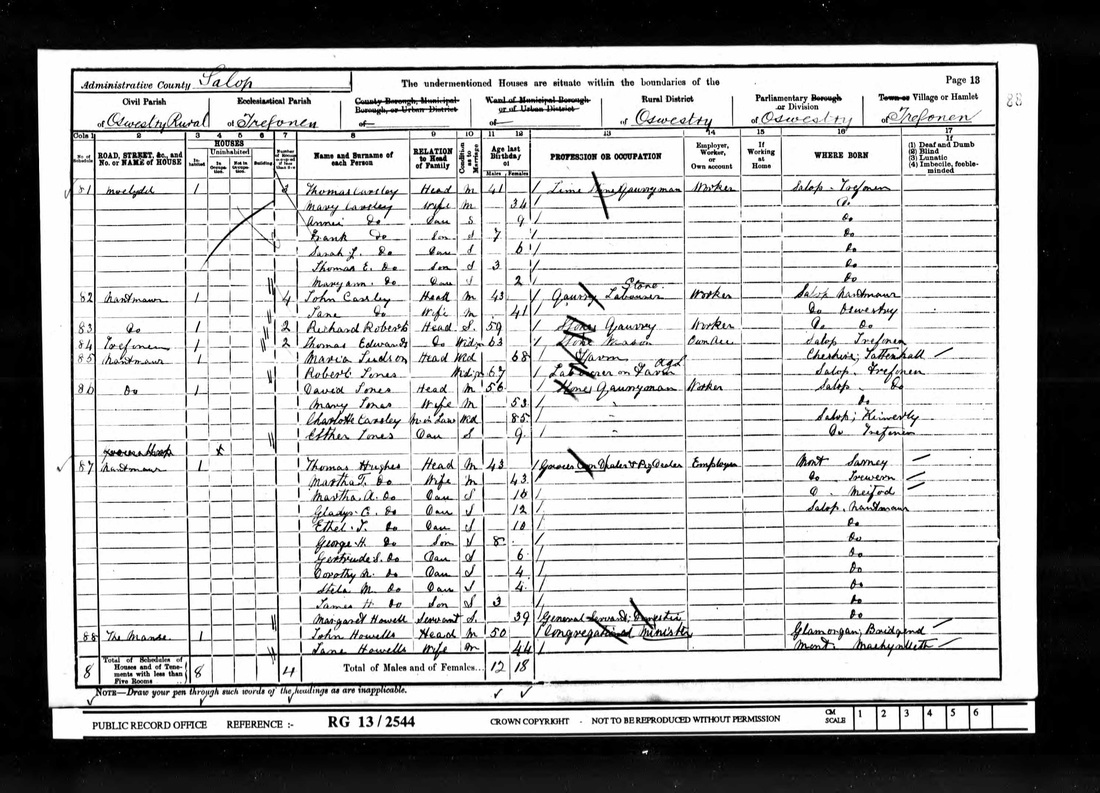 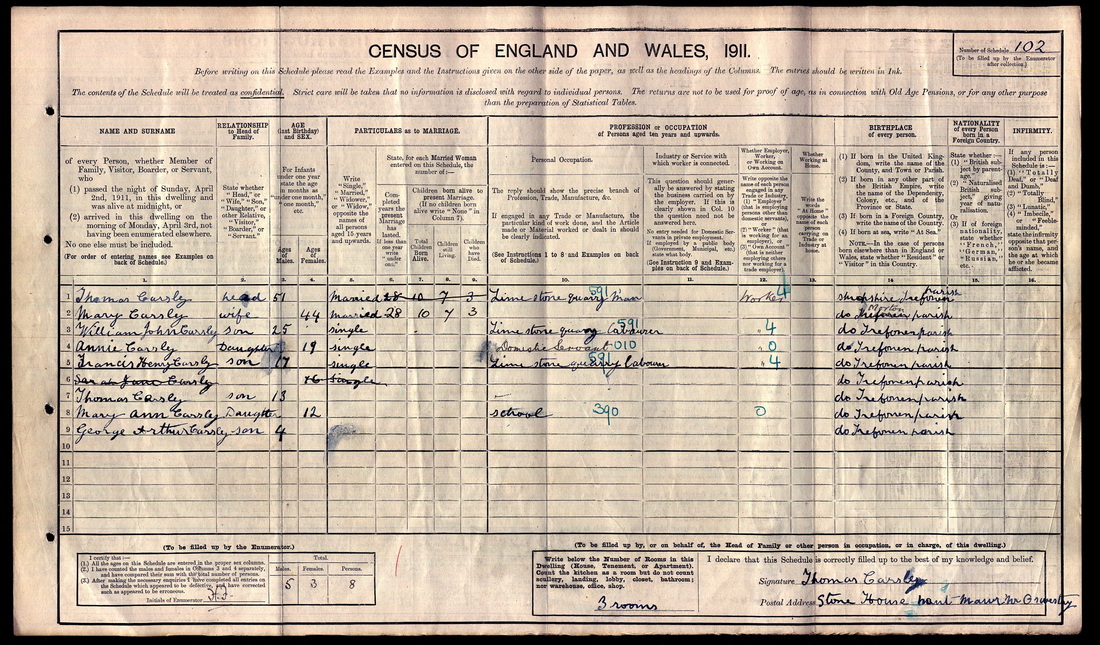 1911 Census - Stone House
Historical Information
​The DOIRAN MEMORIAL stands roughly in the centre of the line occupied for two years by the Allies in Macedonia, but close to the western end, which was held by Commonwealth forces. It marks the scene of the fierce fighting of 1917-1918, which caused the majority of the Commonwealth battle casualties.

From October 1915 to the end of November 1918, the British Salonika Force suffered some 2,800 deaths in action, 1,400 from wounds and 4,200 from sickness. The campaign afforded few successes for the Allies, and none of any importance until the last two months. The action of the Commonwealth force was hampered throughout by widespread and unavoidable sickness and by continual diplomatic and personal differences with neutrals or Allies. On one front there was a wide malarial river valley and on the other, difficult mountain ranges, and many of the roads and railways it required had to be specially constructed.

The memorial serves the dual purpose of Battle Memorial of the British Salonika Force (for which a large sum of money was subscribed by the officers and men of that force), and place of commemoration for more than 2,000 Commonwealth servicemen who died in Macedonia and whose graves are not known.

The memorial was designed by Sir Robert Lorimer with sculpture by Walter Gilbert. It was unveiled by Sir George Macdonogh on 25 September 1926.

​click on the link below for more information
​www.cwgc.org/find-a-cemetery/cemetery/160000/DOIRAN%20MEMORIAL 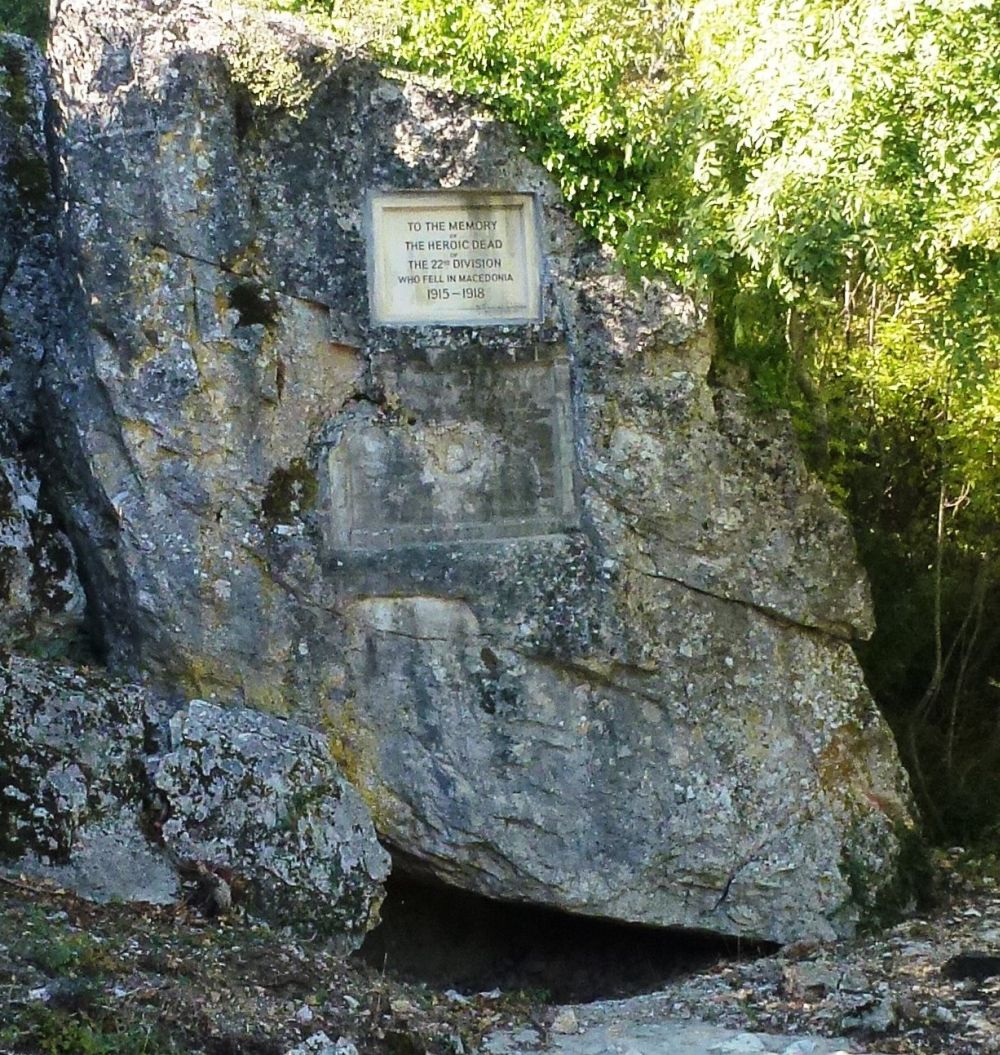 Memorial Plaque to the 22nd Division
Powered by