Thomas Henry Hughes
Thomas Henry Hughes (20) died on the 16th September 1916 and it is likely that he died from wounds recieved the day before, when the Battallion had been in heavy fighting with their War Diary reading

The weather was dry but cold in the evenings. Their objective was to take over a trench held by the Germans called Gird Trench which they failed to do. There seems to have been an inquiry as to why this had not happened and letters from the time suggest that various officers were under investigation for not fully following orders. However during the action it says that four German field guns and one machine gun had been captured. these had caused particular difficulties for them earlier during the engagement

​ It is also interesting to note that

"A new engine of war was used for the first time, a petrol driven armoured car known as a Tank. Four of these had been alotted to the Division and were considered to have done splendid work" Casualties for the day were recorded as officers Killed 1, Orderlies killed 34, Officers wounded 11, Orderlies killed 184, and 34 missing. 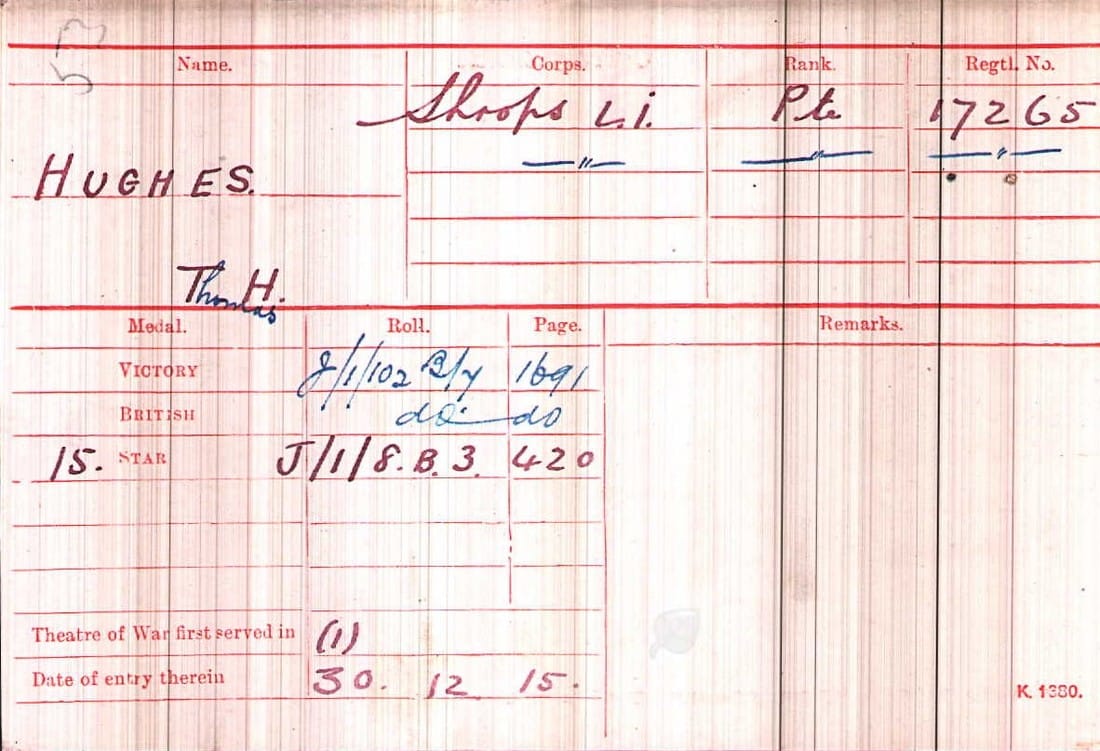 Medal Roll Index Card
Battalion Information
A war-raised Service Battalion, formed in Shrewsbury in August 1914 under Lt. Col. H. M. Smith, from the mass of enthusiastic volunteers coming forward to enlist. Posted to the 42nd Brigade, 14th Division.
​
After training around Aldershot, it landed at Boulogne on 20th May 1915, first coming under fire at Ypres on 31st May 1915, and then served entirely on the Western Front.

It saw some of the worst fighting of the war in the Ypres Salient in 1915, around Bellewaerde and Hooge; was on the Somme in 1916, seeing particularly heavy fighting at Delville Wood and Flers-Courcelette. 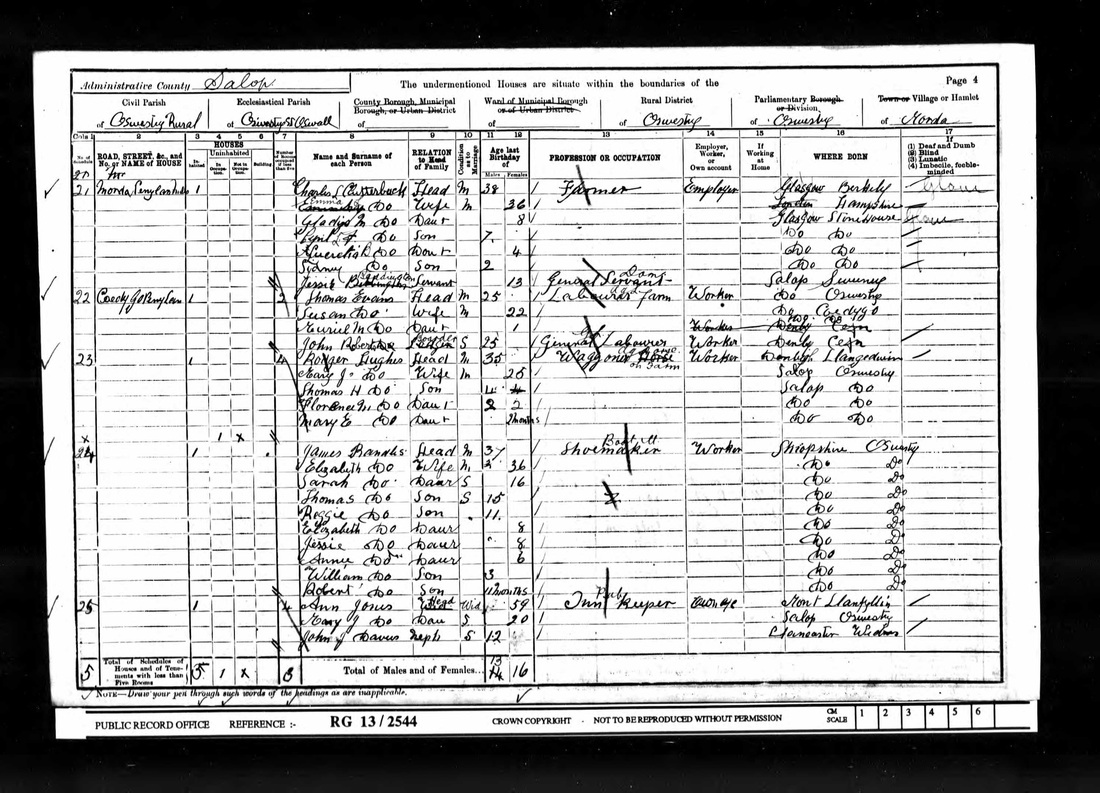 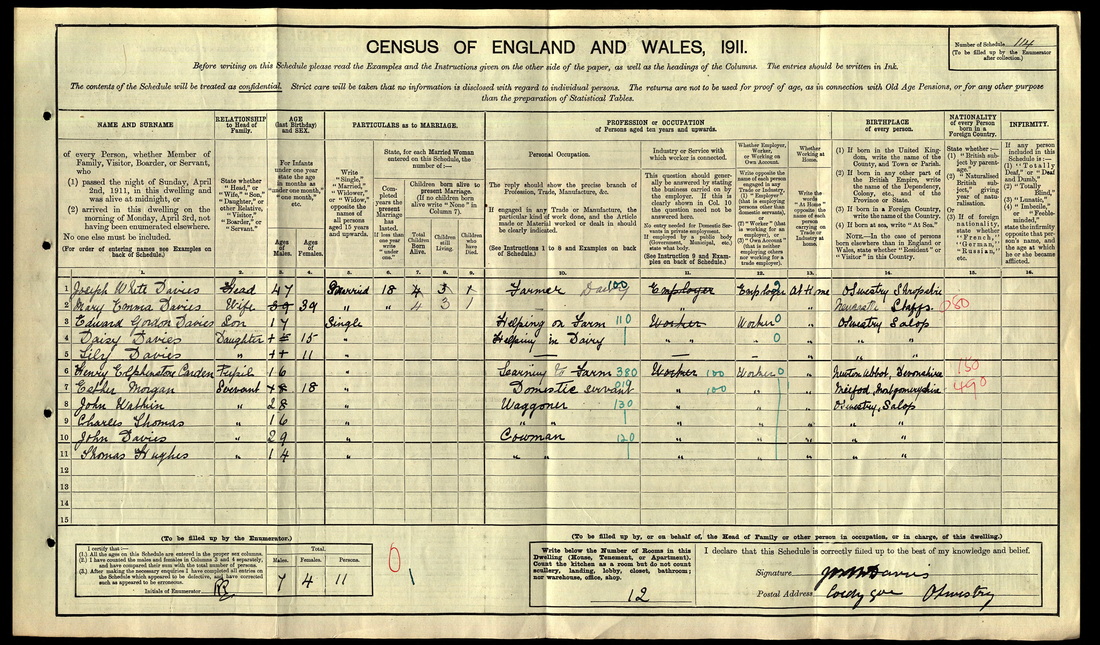 1911 Census - Cowman at Coed Y Go Farm
Historical Information
​
On 1 July 1916, supported by a French attack to the south, thirteen divisions of Commonwealth forces launched an offensive on a line from north of Gommecourt to Maricourt. Despite a preliminary bombardment lasting seven days, the German defences were barely touched and the attack met unexpectedly fierce resistance. Losses were catastrophic and with only minimal advances on the southern flank, the initial attack was a failure. In the following weeks, huge resources of manpower and equipment were deployed in an attempt to exploit the modest successes of the first day. However, the German Army resisted tenaciously and repeated attacks and counter attacks meant a major battle for every village, copse and farmhouse gained. At the end of September, Thiepval was finally captured. The village had been an original objective of 1 July. Attacks north and east continued throughout October and into November in increasingly difficult weather conditions. The Battle of the Somme finally ended on 18 November with the onset of winter.